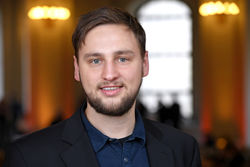 Christoph Paetz is working as a senior researcher at the Macroeconomic Policy Institute (IMK) in the Hans-Boeckler Foundation and is currently doing his PhD at the University of Duisburg-Essen on the effects of fiscal rules. His research interests are tax and fiscal policies, fiscal rules and macroeconomic performance.

Before he studied from 2009 to 2014 at the Berlin School of Economics and Law, first Economics (B.A.) and afterwards International Economics (M.A.). During his studies he had study visits at the New School for Social Research (NSSR) and the CSU Fresno Craig School of Business, US, and completed internships at the Economics Department of the German Embassy in London and the Fiscal Policy Departments of the Federation of German Trade Unions (DGB Bundeszentrale) as well as the IMK. Furthermore, he worked as a student assistant from 2013 to 2014 at the Institute for International Political Economy (IPE) in Berlin.